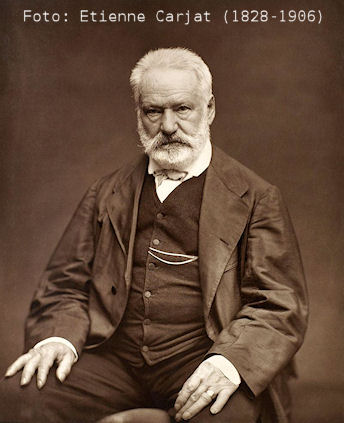 Victor Hugo was born as a son of a General; because his father was permanently away he was bred chiefly by his mother. At the age of 13 he already wrote first poems and at the age of 17 he founded a critical literary magazine for which he contributed the most articles. Victor Hugo lost an important parent person when his mother died in 1821.

Victor Hugo got married at the age of 20 and published his first poem volume one year later. With the fantastic novel "Han d'Islande" the public became aware of Hugo for the first time. He was involved in the literary group "Cénacle" und became their speaker.

Though Victor Hugo grew up in royal surroundings, his next poem "Les Orientales" revealed a byroneske sympathy for the Greek patriots and for the republic.

In 1827 he performed "Marion de Lorme", but the play fall victim to the censorship. Hugo reacted to this failure with "Hernani" - came out in 1830; in which verses he praised a young outlaw - and produced with it a romantic movement and Hugo became a symbol for the romantic young generation.

Just only 29 years old Victor Hugo wrote his most popular novel "Notre Dame de Paris - The Hunckback of Notre Dame", which once more moved a social outsider into the hub of the happening. Victor Hugo achieved with this novel to success and glory.

His later life was influenced by difficult political circumstances and family bad blows (his married daughter drowned in 1843).

When the revolution broke out in 1848, Victor Hugo couldn't decide on for one of both sides. He was a friend of Louis-Philippe and as a representative of Paris he supported Louis-Napoléon. But with the coup of 1851 he showed his true color and expressed his displeasure with protests. Victor Hugo had to flee. He fled to Brussels first and then went on to Jersey.

Victor Hugo stood nearly twenty years in exile, but there - and later in Guernsey - he produced some of his best works, for example the marvelous poem "Les Châtimes", his colorful "Légende des Siècles" and the novel "Les Misérables", in which he narrates of Paris of his youth.
With the last-mentioned he erected a monument to himself in the world of literature.
In a famous "Préface" he was busy with the turbulent world of Shakespeare und the spiritualism. In "Les Travailleurs de la Mer", which is set in Guernsey, and "L'Homme que rit", which is set in England of the 17th century, he digested his new environment.

His beloved wife died in 1868. A common return to France wasn't possible. When the republic was proclaimed in 1878 Victor Hugo returned to Paris. In the same year he suffered a stroke, seven years later he died.

His work was a typical product of the 19th century - full with noble aims and of a gigantic dimensions.

Extract from his works: