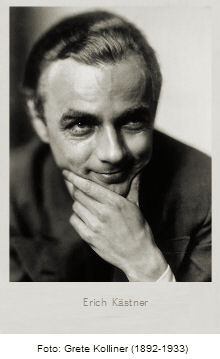 The children's book author, lyricist and satirist Erich Kästner was regarded as one of the great moralists and humorists of German literature. Especially in his children's books he emphasized the positive in a human being over and over again. His most famoust book is "Emil und die Detektive." Other famous books are "Das doppelte Lottchen", "Das fliegende Klassenzimmer", "Der 35. Mai", "Das verhexte Telefon" and "Pünktchen und Anton."

But Kästner was also a writer for adults. In his novels he often criticized the existing social conditions, for example in "Der Zauberlehrling", "Drei Männer im Schnee", "Die 13 Monate" and "Fabian."

Erich Kästner was born in Dresden in 1899. During his school days he turned out to be a diligent schoolboy. He liked school so much that he decided to become a teacher. His positive attitude towards the profession of a teacher - this was also the wish of his mother - he pointed out most clearly in his novel "Das fliegende Klassenzimmer", where the teacher set an example to his students and was a person to whom everybody could talk about everything. When Erich Kästner had the opportunity to do a lesson himself during a test seminar, his point of view relativized towards the school. He looked at the school as a kind of barracks for children. He realized that he wasn't a teacher but a learner. From now on his professional wish was to become a journalist and writer.

In 1919 he went to Leipzig in order to study German philology and theater. After a short excursion as an editor for a Leipzig newspaper he went to Berlin as a freelance writer. There he wrote the novel "Emil und die Detektive" in 1929, which became a worldwide success at once; soon after he wrote "Pünktchen und Anton."

His book "Fabian" for adults was published in 1931 and tells the story of a moralist during the time of the decline of the Weimar republic and the beginning of the Nazis.

Kästner was very dependent on his mother. This was certainly one reason that he wasn't "capable" of a relationship. He developed into a ladykiller and had nearly always several relationships at the same time. To found a family was out of question although he had an illegitimate son. He almost wrote letters to his mother daily in which he told her about his life. He addressed her "Liebes gutes Muttchen - Dear good mother" in these letter and finished them with "Tausend Grüsschen und Küsschen, Dein Junge - Thousand greetings and kisses, your boy".

Kästner became an ostracized writer, whose poems and the book "Fabian" were burned. He was prohibited to publish. Kästner decided to publish his books abroad under a pseudonymous. When the Nazis noticed how well Kästner's books sold abroad they relaxed the writing prohibition. Kästner was allowed to write apolitical and amusing stories which were published through a Swiss publishing house. In Germany itself it was still forbidden to publish any of his books.

At the beginning of the 40's he was permitted to write scripts for the German movie industry but only under his pseudonymous "Bertold Bürger" (e.g. for Münchhausen (43)).
Kästner went on nearly effortlessly from his successes of the 20's and 30's to success after World War II. He wrote, among others, "Das doppelte Lottchen". With his novel "Die Konferenz der Tiere" he denounced the madness of armament.

At the end of his life he felt more and more hopless about history and took refuge in alcohol. A suicide in installments. He developed cancer of the esophagus and died on 29th July 1974.